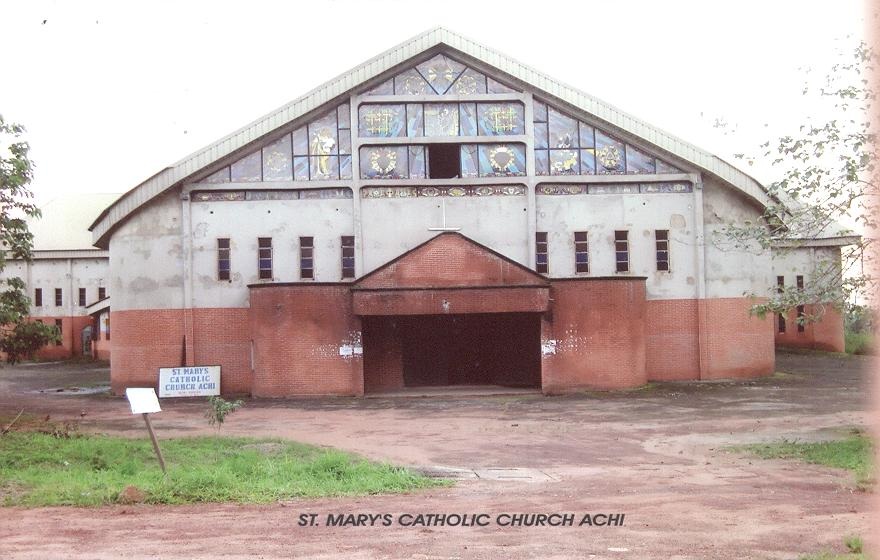 Here is a concise history of Catholicism in Achi land. Geographically speaking. Achi occupies a central position in Igbo land. Achi land is inhabited by on ethnic group of Igbo of two racial stocks. Thus, we have 12 autonomous towns in Achi clan, strictly speaking; and by far more than this number, loosely speaking. Achi has gained a pride of place in Igbo land and beyond in terms of culture and religion, commerce and industry, education and in socio-political spheres of life. The Achi connotes vivacity, boldness, enterprise and gaiety. Catholicism came to Achi land soon after the unsuccessful military expedition of Achi people's army against the better-armed British colonial forces of Enuguabo, ufuma (in present day Anambra State). The battle of Enuguabo Ufuma was followed respectively by the British advance, occupation, and systematic subjugation of Achi land and people.

It was in 1918 (well after that colonial war) that Warrant Chief Onuzulike Ume-a-Maka of Nkpokolo town (then village) brought into Achi land the Catholic Mission that established the church which, it was generally believed, was also in favour of his open ridicule and demonstrative rejection of the English Church Missionary Society (CSM) which had shown its presence in Achi a little earlier. Thus, the Catholic church journeyed from the relatively distant land of Eke (in present day Udi Local Government Area of Enugu State) by the instrumentality of a potentate, Warrant Chief Onyeama Onwusi of Eke, who was a son-in-law to Chief Onuzulike. Mr. Samuel Abbah from Ogbunike (now in Anambra State) served as both a school teacher and a catechist for the young church while Father Marcel Grandin (a French priest) served as a pioneer missioner. The school/church establishment was first located at Chief Onuzulike's compound, then at Ekegbo market square in Nkpokolo from where it went to rest at her present site at Agu-nwa-Eke still in Nkpoloko by the directives of Father Grandin in 1919.

In 1923 the C.M.S. at Adu completely folded up and its former members, manser4vers, David Chukwu, Aaron Okolo and Isaiah Madu became converts to the Catholic Church. Later in 1934, St. Gabriel's Catholic Church Adu station was opened. It was then under the administrative of St. Theresa's Parish Mmaku. By the year 1974, St. Mary's Parish Achi was caved out of St. Theresa's Parish Mmaku, St. Gabriel's Catholic Station Adu was under St. Mary's Parish Achi with other stations until 29th day of September 2005 when Awgu Diocese was erected. By the end of 2006, the first Bishop of Awgu Diocese, his Lordship Most Rev. Dr. Ifeanyichukwu Okoye considered Adu and Ehuhe stations worthy of being a parish. He then created St. Gabriel's Catholic Church Adu-Achi for the two communities.

Also, he sent a new parish priest in the person of Rev. Father Lawrence Chidi Nnamani as the pionner parish priest. On the 10th day of December 2006, St. Gabriel's Parish Adu-Achi was officially inaugurated with a Holy Mass presided over by the parish priest Rev. Father Lawrence Chidi Nnamani. We are happy and indeed grateful that the Almighty God has already from the young Adu parish even before its inauguration in 2006 produced some good labourers to the Lords vineyard. On Aug. 1998, our son Rev. Father Stanislaus Chukwu Ilo from Adu-Achi was ordained a catholic priest, followed by Rev. Father Basil Ezika who was ordained a catholic priest on 16th July 2005. On 17th day August 2010, Rev. Father Leander Chinonso Eze was ordained a catholic priest. On 4th day August 2012, another father has been added on the numerical growth of the labourer in the Lords vineyard in Adu parish in the person of Rev. Felix Echezonachukwu Eze. The young parish St. Gabriel's Parish Adu-Achi has also fared well in their young girls' profession Religious life. The first woman Religious produced from the area is Rev. Sr. Bridget Chukwu from Ehuhe, though (late). Others are:- Rev. Sr. Mary Geraldine Chime-Adu, Rev. Sr. Justina Chukwu from Adu as well. As we thank God for his blessings towards Adu-Ach Parish, we hope to harness our human resources together and work from the establishment of God's kingdom in Adu Parish. 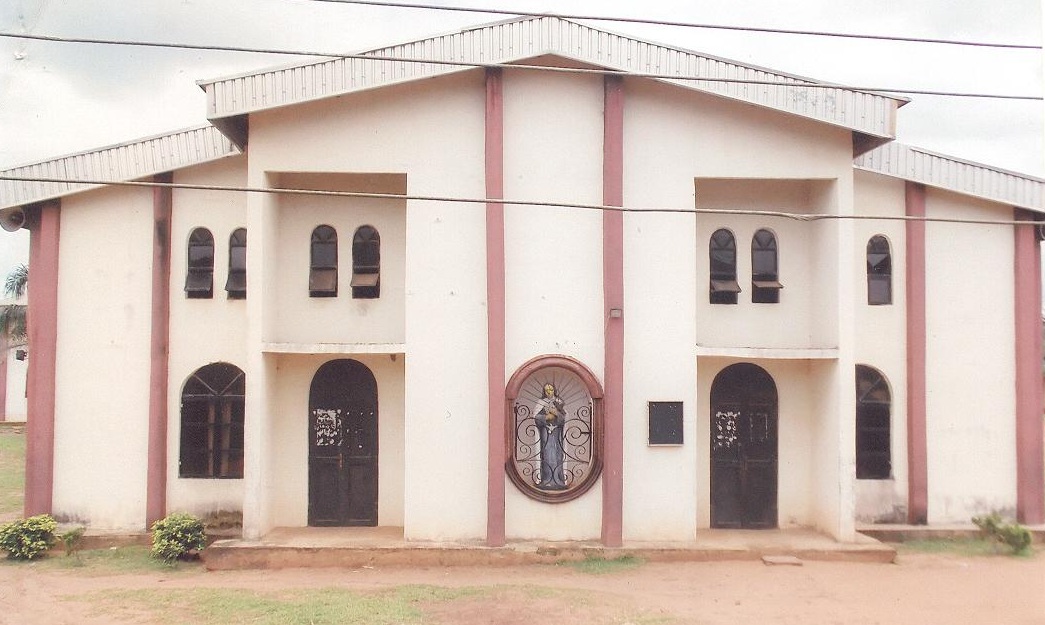 In January 1923, a strong wind of change in religious belief began to blow. By then Moses Udeagbara conceive the idea of establishing the Catholic Church in his own family circle, Umuori. Quickly he switched over to St. Mary's Church Mkpokoro Achi, the only place where the Catholic Church was operating. His movement to Mkpokoro attracted many other members and they broke away with him, attending Church services and Catechism classes there.

As time went on, Moses made series of contact with some well meaning Christians and the Rev. Fr. In-charge Eke Parish, Rev. Fr. Davy. They gave him words of encouragement and he continued with his companions. Every new day came with new adherents into their fold. Within a short time there was tremendous increase in number. These formed the pioneer members of the present St. Theresa's Parish, Enuguagu Achi. Among these were Moses Udeagbara himself, Alphonsus Ojiako, Mathew Atuegbu, Lawrence Onwuzulu, Joseph Oha, Ngwu Eze, Elelia Obu, Isaac Uhara, Michael Okoro, Thomas Atuegbu, Jerome Onyevu, Alfred Ude, Daniel Ude, Philip Ude, Wilfred Ezeokpube and Celesus Unuegbu (all of blessed memories). A few women also joined them later.

They were Late Elizabeth Onu, Esther Aha and Catherine Oji. Only one of the pioneer members is still a life, Ozo B. U. Madu. Today he still stands as a living legend. From the year 1923, Moses and his members were eager to come home to erect their own church. In order to actualize their dream, they made several appeal and representation to the then clan head of Enuguagu, i.e the Warrant Chief.

Unfortunately their appeals were treated with ignominy because he vowed never to allow the Catholic Church to grow in his domain. This struggle continued for over four years without success instead, they were subjected to all sorts of harassment, intimidation, malicious charges in the court. Sometimes they were force carry loads for Government Officers to distant places. All these inhuman treatment and brutal acts were aimed to working them to unconditional surrender. But in spite of their lean resources, they still remained steadfast and prayerful, with Rev. Fr. Davy always on their side.

In 1927, the Warrant Chief was persuaded to grant the opening of the Catholic Church in Umuori. The news was received with immense joy and jubilation. Immediately a site was chosen. A parcel of land was bought and cleared. In July the same year, without waste of time a hut, made of palm leaves (AWALA) was erected as a miniature church. Later the church was change to grass house to make room for a more comfortable accommodation.

In 1928 the first teacher Mr. Okonkwo Michael, from Umuabi Udi was posted to the Mission still under name R.C.M. Umuori.

Through the church had been established and classes held, the ugly incidence of disturbance from the Chief and his men still continued, culminating in constant insults, public assaults. In the face of these problems, Moses and his men continued to enjoy the moral and financial support of other Rev. Frs., like Fox, Witney, Maury and Brusanham. With steady increase in number these formidable founding members became more encouraged and always prompt in action.

In 1937 the battle with the Chief came to end through timely intervention of Rev. Fr. Giltnan who advised the teacher in charge of the mission Mr. Philip Ifo from Oghe to document their ordeals and forward same to Government at Enugu. This he did after weeks, a stern warning came to the chief to leave the people to practice the religion of their choice. This R.C.M umuori Achi (fondly called Egbo-Eze) (now St. Theresa's) came to stand, all to the pride and glory of unyielding founder and his undaunted followers.

oday, when we look back to the early years of St. Theresa's Church vis-à-vis her present position, we say "BRAVO" to the early founders, because their miniature building has today given birth to a vibrant Church, with one out-stations; St. John's Stations Church, Ihe Achi and One Mass Centre – Assumption Umuowulu. Her structural, human and spiritual developments are in bounds.

The spring-board of the catholic church activities and spread in oji River urban community is the "celebrated" St. Michael' s Catholic Church in the leper colony founded about 1937. From the colony, the church was transferred to Dodo and its contiguous community of Oji NATO.This church was administered from Awka parish in Onitsha Diocese .With the influx of civil servants following the establishment of the Oji River Thermal power station, a Catholic church/school was also founded at Ugwunzu/ Agbalenyi. This mission was administered by an expatriate catholic priest (Rev.Father Brady) from Udi.

There was no Catholic institution at MILE TWO and this presented much difficulty for the few Catholics residing there because St.Mary's Achi w3as quite a good distance to go for worship, Both Dodo and Agbalenyi Catholic churches were not near either .But as God designed it, by the magnanimity of successive principal of the Rural Health Training school situated at MILE TWO, the Catholics, few in number, held church services in the classroom designed to accommodate about forty students. Here also the Anglicans resident in MILE TWO .used alternatively with the Catholics on Sunday's .By about 1964.the parish priest from Maku Parrish began to minister to the Catholic in MILE TWO .The first expatriate priest to celebrate Holy Mass in MILE TWO WAS Rev.Father Sweeney from ST. THERESA'S PARISH MAKU.

As the catholic community in oji River grew, the zeal for expansion also grew .The three section of the community –MILE II, DODO, UGWUNZU-organised harvest and bazaar together at different stations on different dates. This was to enable different stations to attend and raise money to develop each of the sections. This spirit of cooperation was sustained and questions on how to pull resources together were raised. The objective was laudable but the means of achieving it was a knee-bone affair.

The people of Awgu geographical circumscription were a deeply religious people; who before the advent of Christianity in Igboland had a common religious heritage of a belief in One, Unseen, Omnipotent God. This Almighty God was referred to as Ali Awgu (the Awgu earth goddess).